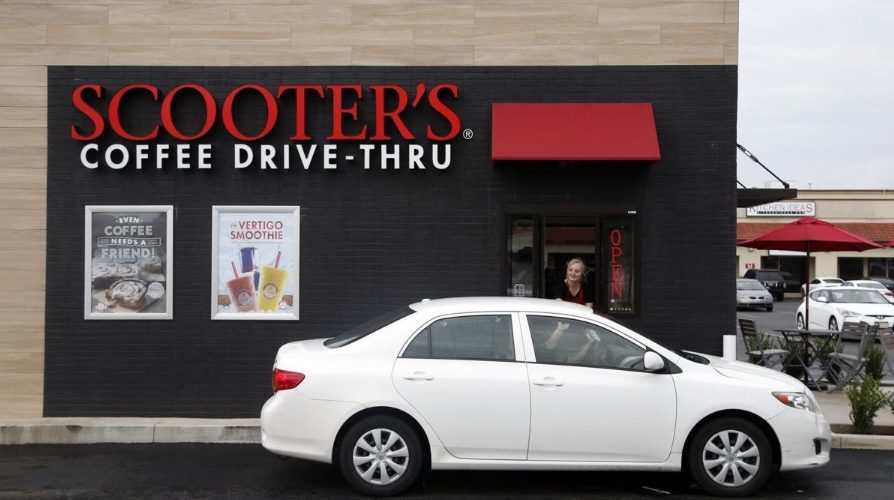 Morgan Wolff formerly lived in Omaha, Nebraska, and that proved to be a stroke of good fortune when she and business partner Bill Allen were looking for a project.

“I went to the University of Nebraska-Omaha, and I went to Scooter’s Coffee every morning,” she said. “I loved the speed and quality of Scooter’s.”

She has known Allen the past few years in the oil industry. Allen, a Muskogee native who earned a degree in accounting and finance at Northeastern State University, had worked for SemGroup and currently is president of Pacer Energy.

“Morgan and I were sharing ideas about a business to start, and we looked at a lot of things that didn’t make sense for one reason or another,” Allen said. “Morgan mentioned Scooter’s from her days in Omaha.

“We looked into it and met with the founder, Don Eckles, and things just kept moving forward from there.”

Scooter’s Coffee is located in a small, stand-alone building in the parking lot on the west side of Lewis Avenue at 69th Street with drive-through service only. An old phone store was demolished to make room for it.

The coffee I had there was rich-flavored and satisfying. It is made from shade-grown, organic coffee beans sourced through the Arbor Day Foundation. Scooter’s also has smoothies and organic teas.

Food choices include a range of pastries, breakfast burritos and breakfast sandwiches. The pastries are flash-frozen and shipped here twice a week, where they are baked off at the store. The burritos and sandwiches are made to order.

I felt a little sorry for the young lady on duty — her name was Haylee, according to my receipt — who said she was manning the store alone at the moment, after I had rattled off a lengthy order. Luckily, possibly because it was raining, I was the only car in line for about 10 minutes, and she knocked out my order in about 15 minutes.

The Southwest burrito had the most ingredients and the biggest flavor of all of our choices. It was a little spicy-hot and included eggs, potatoes, cheese, chorizo, black beans, corn and tomatoes.

The egg-and-potato burrito also included cheese and a few green chilies. I think the green chilies needed a bigger presence in this dish.

In addition to a thin slice of turkey sausage, that sandwich also included eggs and Gouda cheese, while the bacon breakfast sandwich was prepared with eggs, Gouda cheese and bacon. Both were fine, if a little bland.

I had ordered a dish I had seen online — iced lemon bread — but was told it wasn’t available that day. I replaced it with the cinnamon roll and was glad I did. It had a thick icing that was not too sweet and a nice cinnamon flavor.

The cookies were huge, and the muffin had a crumbly texture when heated.

Wolff and Allen said they scouted a number of areas before settling on their current location.

“We’re a drive-through, and we’ve seen a lot of commuters along here,” Wolff said. “We see a lot of moms or dads with children, and they want something fast and not have to get out of the car.”

Allen said they plan for Scooter’s to get involved in community projects, and expansion is almost certain.

“We plan to expand with more stores in the Tulsa area, and we might even consider a couple of walk-in restaurants,” he said.

Scooter’s is known for putting smiley face stickers on the top of its coffee cup lids.

“We’re the first thing many people see in the morning, and we want to give them a little smile to start the day,” Wolff said.