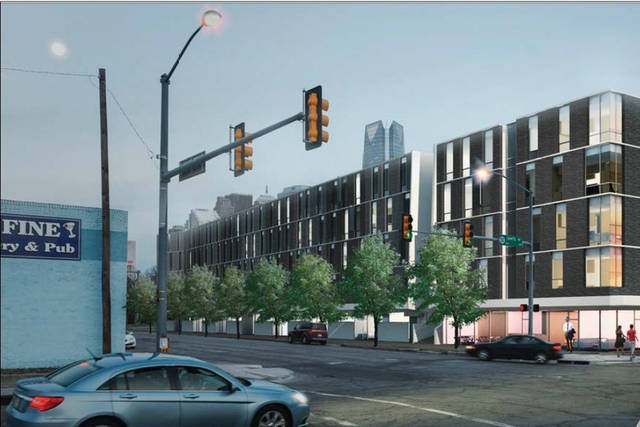 A partnership consisting of the new owners of the Sycamore Square Apartments and local developer Andy Burnett is proposing to build a five-story, $23.4 million apartment complex at the southeast corner of NW 4 and Shartel.

The downtown property is the last undeveloped section left of the original Sycamore Square super-block, which was cleared by Urban Renewal in the 1970s. Only Sycamore Square Apartments and Sycamore Square Condominiums were built in the center section of the property (in the early 1980s), leaving large swaths of empty land on the east and west sections of the super-block.

The proposal submitted Monday was the only response to a request for development proposals issued by the Urban Renewal Authority. Dubbed “700 West,” the complex is to offer 72 efficiency units, 120 one-bedroom units, 28 two-bedroom units, and 15 live/work units.

“The live/work units are an opportunity for us to create an artists’ theme, something for artists, architects and start-ups to live above their work space,” Burnett said. “Traditional retail hasn’t done well in some of the standard downtown housing properties. So we’re trying to create a good storefront feel with good interaction with the street for artists, architects and start-ups where they can live upstairs. We’re trying to cater to the creative crowd.”

The partnership is led by Rohan Gupta and Aman Aggarwal with GFO Companies, which bought the adjoining Sycamore Square South apartments and plan improvements to the complex.

Burnett said that if the development is approved by Urban Renewal, the partners wish to begin construction within six months or “as soon as possible.” Construction is expected to take 18 to 20 months to complete.

The proposal suggests changes to the street grid, including reopening and rebuilding Lee Avenue between Sycamore Square and 700 West and between NW 4 and Dean A. McGee Avenue. A similar reopening of Dewey Avenue was done as part of construction of the Legacy at Arts Quarter, now Avana Arts Apartments, on east third of the former Urban Renewal super-block.

The developers also propose narrowing NW 4 and Shartel to make the area more pedestrian friendly and provide more curb-side parking. “We want to create a feel of community with this,” Burnett said. “And we want it to be alive with creative space.”