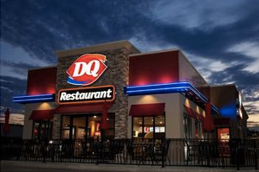 Right now, there are only two Dairy Queens in the entire Tulsa area — one in Broken Arrow at 3102 W. Kenosha St. and one inside Woodland Hills Mall.

But the relative lack of Dairy Queens will soon come to an end, as a Dallas franchisee plans to build seven more of them over the next three years.

The first will come to Owasso immediately north of the Cracker Barrel at U.S. 169 and 96th Street North, with a June opening date, said Ken Ward, vice president of operations for Vasari LLC.

The second will be built at the former site of the recently closed Pancho’s Mexican Buffet at 7819 E Admiral Place. The Pancho’s will be demolished to make way for a new, freestanding building to be constructed by July.

Caitlin D. Boewe is a CB Richard Ellis broker who, along with Lindsey Morehead, has been working to find new sites for Dairy Queens for Vasari. Boewe said they’re finalizing a third site that could be finished by the end of the year.

“We’ve got several areas identified for expansion, including Tulsa Hills, east Tulsa, midtown near 21st and Yale, and Woodland Hills,” she said.

Ken Ward, vice president of operations for Vasari LLC, said he and his partners have eyed Tulsa as the prime target for more Dairy Queens ever since they purchased the company a year and a half ago.

“There’s a lot of pent-up demand for Dairy Queen there,” he said. “We’ve gotten a lot of response from people asking us to build stores there.”

Even with the success, Davis isn’t in a rush to open more of his own.

“We may later, but we don’t have any immediate plans,” he said.

Tulsa used to have plenty of Dairy Queens — a 1979 phone book listed 18 in the area, though the next year showed just four. For many years, the only Dairy Queens were the mall location that opened in Woodland Hills in 1995, and one that was open inside Tulsa Promenade mall for a time.

Ward said each of Vasari’s new locations will be newly-constructed, 2,800-square-foot restaurants that seat 72 people and have expanded kitchens to handle the variety of hot and cold foods.

Though the Blizzard is the most famous treat at Dairy Queen — Ward said the top-seller is the Oreo flavor — there’s a new dessert headed to Dairy Queen that might roll out in time for the new stores.

“There’s a new line coming out called DQ Bakes,” he said. “It’s a gooey chocolate-chip cookie or apple crisp heated up with ice cream on top.”

Vasari operates 76 Dairy Queens, most of which are in Texas. Ward said the company looks to expand into eastern Oklahoma and Arkansas next.