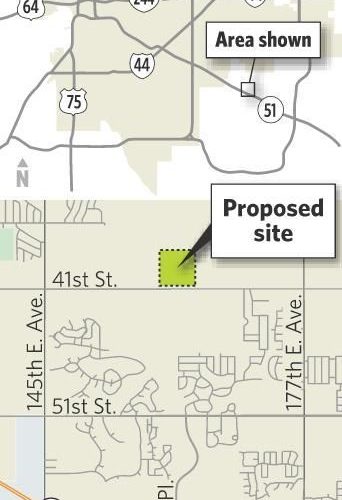 BROKEN ARROW — The Broken Arrow school board has authorized district officials to negotiate a contract for the purchase of a 20-acre plot that could serve as the site of a future elementary school.

The property is at 41st Street and the approximate location of Elm Place, if that street extended north to 41st Street.

“As our district continues to grow, we are working hard with our city leaders and our demographer to forecast growth patterns and pockets so we can stay ahead of the growth curve,” said Jarod Mendenhall, superintendent of Broken Arrow Public Schools.

Last year’s $370 million bond package included building four new schools — three elementaries and a middle school. Forty acres was purchased earlier this year, for $1.3 million, at 209th East Avenue just north of 71st Street, where the middle school and one of the elementaries will be built.

District spokeswoman Shelli Holland-Handy said, “We anticipate this site will be used for one of the new elementary schools that were approved on the 2015 bond issue, but at this time we cannot say for certain.”

Construction on the district’s 15th elementary site on 209th East Avenue will begin in May and is expected to be complete in time for the 2017-18 school year. The district’s sixth middle school, which will be built at the same site, is part of Phase III of the projects.

The district has not yet determined locations for the remaining sites that are part of the bond issue.

Mendenhall noted that the 2015 bond also allowed for adding classrooms onto the high school and freshman academy.

“Our main objective is to ensure equity across the district at all grade levels so that every student has the optimum learning environment,” he said.