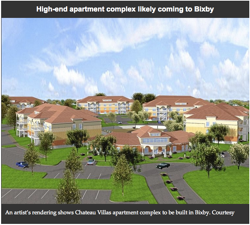 BIXBY – Work may begin this spring on a new apartment complex that is being called the most luxurious in the state.

In a 3-2 vote, the Bixby City Council last month conditionally approved the rezoning and planned unit development applications for the Chateau Villas project.

The 23-acre development at the southeast corner of 121st Street and Memorial Drive would include 375 high-end units. The one-, two- and three-bedroom apartments would feature 9-foot ceilings, wood floors and top-of-the-line appliances.

“These are going to be really a cut above most apartments you see,” said Kevin Jordan, CEO of the Black Gold Group, the project developer.

Jordan added that the complex would be comparable to upscale developments in suburban Dallas.

Mayor Ray Bowen and Councilors Steve Todoroff and Dennis Loudermilk voted for the project. Vice Mayor John Easton and Councilor Brian Guthrie voted against it, citing a concern that Bixby was attracting too many apartment complexes.

“It’s really hard to say no to one and yes to another one,” Guthrie said. “… I mean, these are nice  they really are nice. I just don’t know that that’s the right location for them.”

Bixby City Planner Erik Enyart said no one protested the development at any planning commission meeting.

John Benjamin, a member of the Bixby planning commission and a former Tulsa city councilor, spoke in favor of the project.

“I have never seen a development as first class as this,” said Benjamin, who lives in Bixby’s Falcon Ridge addition.

Benjamin said the type of people the complex will attract will provide an economic boost to the city.

Richard Stewart, a Bixby resident who previously said he plans to run against Bowen in the next election, also spoke about the project.

“I’m a little cautious about more apartments coming into our city,” Stewart said.

“Once apartments go up, it’s hard to replace them with businesses,” he said.

But Jordan said there is a market for this type of high-end apartment.

Jordan said the recently built Encore apartment complex, which currently has 100 percent occupancy, has shown there’s a “market niche” in the south Tulsa and Bixby area for people in their 50s and 60s who no longer want to keep their houses.

“We feel like this will bring both young professionals, as well as 50-something-type people  empty nesters, kids are gone  that want to sell their house and travel more,” he said.

The developers will bring back the project for final approval by ordinance once they close on the land purchase deal.

A clay-tile roof and plenty of landscaping will be part of the project. Amenities will include two pools, an 8,000-square-foot clubhouse, and garages and carports.

“We’re building these to keep,” Jordan said. “So this will not be a sell-and-flip to the Californians. So we’re building a quality that will last.”